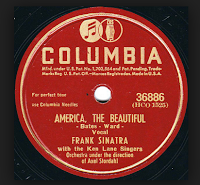 Unfamiliar with Frank Sinatra's 1945 version of this song? Hear it here.

1) In 2016, a group recommended that this week's song replace "The Star Spangled Banner" as our national anthem. They maintain it's just as beautiful but easier to sing. How do you feel about this?
I re-read all the lyrics to remind myself why I like the Star Spangled Banner! The song is a celebration of the fact that the flag that represents freedom still stood after a battle for that freedom. It may be hard to sing, but the lyrics bring a tear to my eye. America the Beautiful is a beautiful song also, with meaningful lyrics which I really love. However, should this be chosen, I believe there would be a big controversy over the fact that the song is calling on God to bless America. Too many stinky protests only divide what is supposed to be the United States!
2) Katharine L. Bates said her lyrics were inspired by a trip to Pike's Peak. What's the most beautiful American spot you've ever visited?
I love the Rockies and the Grand Tetons – maybe the Northwest, Mt. Rainier. There are so many beautiful places in our country, it is difficult to pinpoint one. 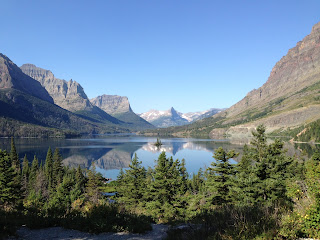 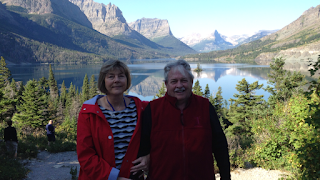 And Alaska!!!! Can't forget Alaska!!
3) The music was written by organist Samuel Augustus Ward. Both Bates and Ward were very formal when signing their names professionally -- she including her middle initial and he with his full middle name. How about you? When you sign checks or documents, do you use your middle name or initial?
Not unless the document has printed it.
4) In 1945, when this version of the song was recorded, America lost Franklin Delano Roosevelt and Frank Sinatra said, "I lost a hero." What late, great American hero from our past would you like to honor today? How about those firefighters and police officers who dealt with 9/11?
5) Also in 1945, a 19-year-old "hoofer" waited outside the Los Angeles radio station where Sinatra was being interviewed. That was the beginning of the friendship between Sammy Davis, Jr., and Frank Sinatra. Tell us about your oldest friend.
My oldest, oldest friend is no longer around. But my oldest friend at this time would be Bettye … we met at church and shared many good adventures. She and I led a Bible study group in my home for many years, and she cleaned our house also. I learned a lot from my friend, Bettye, and we shared secrets no one else has been privy to. She helped me hang wallpaper, she taught me many things about leadership and caring for others, she led me on some wild goose chases, but the memories we share together are sweet, yet not without their "moments".
6) The Fourth of July means we're in the middle of summer. Are you careful about applying sunscreen? Not always.
7) Mosquito bites can be a major summer annoyance. Are you scratching any itches right now? Yes, I have no idea why they like me so much.
8) Emergency rooms report an increase in wrist injuries in summer, with people falling off bikes and skateboards and jamming their wrists catching hard-hit softballs. Have you  been to the ER or Urgent Care during 2019? Nope!
9) New York is home to Nathan's Hot Dog Eating Contest every year on the 4th. Will hot dogs be consumed in your household this weekend?
Not in my household, but I did have a hot dog on Wednesday and again on Thursday this week. Some wonderful men at church grilled burgers and hot dogs before church service on Wednesday night. 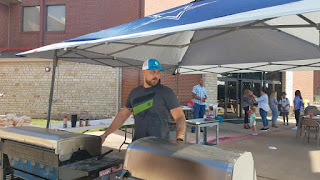 One of the men of Grace cooking out before time to eat! 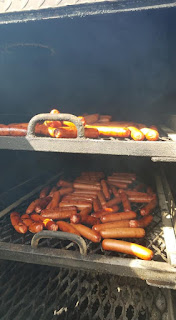 Whole lotta dogs there!
And on July 4th, we went to a pool and food fest at a friend’s home. There must have been 40 or more people there and there was mountains of smoked ribs, chicken and grilled hot dogs … hors d'oeuvres, potato salad, mac and cheese, so much food!!! I ate way too much and then I had three pieces of Texas Sheet Cake! Oh my goodness!!!
So many interesting people to watch and it was quite loud. They had a traditional quiz led by a gentlemen with his master’s in history, so he led the quiz and only those under age 25 were allowed to answer. Surprisingly enough, they got most every one right!
Today I took DH for a blood draw and afterward, took him to breakfast. Ran some errands, re-potted a plant, made some birthday cards, watched a turtle dig a hole for a nest, and had a close encounter with a black grackle! Yikes!
Whew! What a day!

As is often the case our thoughts run along the same line. We answered #1 almost identical. And yes, what beauty can be seen in Alaska. Another same answer. Your 4th sounds like such a fun day. Enjoy your hot weekend, my friend.

Yep, too many would have a major hissy fit if America the Beautiful were to be our national anthem... Have a great Saturday!

The quiz sounds like so much fun! Great way to learn too.
I agree with you on #1. So many would throw a fit over the mention of God. Loved your answers! Have a nice weekend.

Im in total agreement with your answer on #1.. Sometimes I wonder if we wille er get our nation back!

Big fan of the Star Spangled banner here because of the words and the reasons behind it. Most of our patriotic songs are beautiful though.
Those hot dogs..!!! Everyone had them except me.. whine, whine.. I love them, too.

I say let is keep the Star Spangled Banner. Yikes, everyone wants to change everything we have stood for all these years. Too many whiny people out there. LOL. Looks like a fun 4th for you. Blessings to you and your family, xoxo, Susie

I love the Star Spangled Banner and would not want to change it. But I also love America the Beautiful...but it is a different kind of song altogether. I would love to visit the north west and other beautiful places in our country out that way. We have mostly stayed on the east coast, so I am not that familiar with the west. Maybe someday.
We had hot dogs for lunch on Thursday. The guys were here working and were hungry, and that was the quickest and easiest thing to do. We are busy packing/cleaning, etc., so no formal/big dinners right now. Just using up what we have. Have a blessed weekend!

I could have sworn I left a comment here before. oh well...anyway, I love our National anthem and it always brings tears to my eyes-especially when in a crowd and everyone is standing in honor of it- with hands over hearts, etc.
Love the quizzes and answers. xo Diana

The Grand Tetons are on my list of must-sees. I will hopefully get there one of these days. Hope you're having a great summer!