Moving In, Moving On

As I look over my last blog post, it’s been less than a month, but so many changes have taken place since then. Some really strange happenings, hours of labor, and now already feeling nostalgic as I see pictures of the dear family and friends I left behind. But, moving forward, the deed has now been done and Annie and I are finally settled in our new home.

The week before I was to move, we had a big storm come through. Thunder woke me up that morning and I got up to open the curtains so I could watch the storm. Silly me! No sooner did I get back in my bed, than lightning struck so big right in front of my window, I could not believe it. I was sure my house had been hit and was concerned that it might catch fire. Fortunately it did not, however, I discovered that my air conditioner, my security system, and my Internet were all affected by the strike. So I had to quickly take care of all those things so they would be repaired before the closing. A lot of dollars after, and a lot of stress, but I continued to pack to be ready to move. Everybody told me I was a little bit nuts for doing all that packing (because I had paid for the movers to do that), so far I had 100 boxes packed, but it paid off in the long run.

The movers were supposed to show up on 8 September, and on that day they called to let me know they wouldn’t be able to have a truck there until September 11, which was after the closing! After a few rounds with those clowns, I called my realtor in a panic, to see what could be done about changing the closing date. I think I already knew the answer: it could not be changed. However, my realtor being the wonderful person that she is, helped me locate a new mover who said they could be there the next day to load up and take all my stuff to my new home. Although that  was a big relief, at the back my mind was the large amount of money I had paid to the original movers. But, moving on, we went ahead to close and left for Oklahoma. On Friday morning, the movers arrived and we were shocked to see the men who had been sent were two scrawny looking fellows no bigger than me. My dear friends Alice and Fred, our daughter Sara, my brother Phil and his wife Susan all pitched in with me to help unload the truck. Susan brought me enough food to last a week and gorgeous mums to hang at the front porch. Phil grilled steaks and chicken for all of us! At the end of the day, the movers who unloaded everything said they have never had any customers do what we had done. (Needless to say it’s been quite an adventure, but happy to report I was able to get my money back from the original movers.)

Whew! I will never be able to thank enough all the people who helped get me here, encouraged, and took care of me through one of the most stressful times. I am so thankful I listened to God‘s wisdom and didn’t try to make a move while Jay was alive. It would’ve been a huge mistake and wrong thing to do to disrupt his peace in what were to be his last few years. I’m so thankful we were able to enjoy our life together to the end without all that would have been involved.

Now I’m starting over, but thanks to my family here, I am settling in. Some friends from back in Texas will be here tomorrow for a women’s conference and I will meet them for dinner. Yesterday, I met with the ukulele band to practice the songs they will be singing for the nursing home residents. Annie and I have taken two and three walks a day around the neighborhood, which is so pretty. I really like it here.

I have seen so many Canadian geese fly over and many of them are stopping in the field behind me for a snack. They’re  beautiful. I am looking forward to seeing fall colors here. The plan to play pickle ball has been thwarted for now in light of the fact that my back is out of whack from all the lifting and moving I’ve done for the past few months. On top of that, I fell so now I am experiencing a lot of pain and having to take it easy for a while. Hopefully, a visit to the chiropractor tomorrow will resolve the problem. 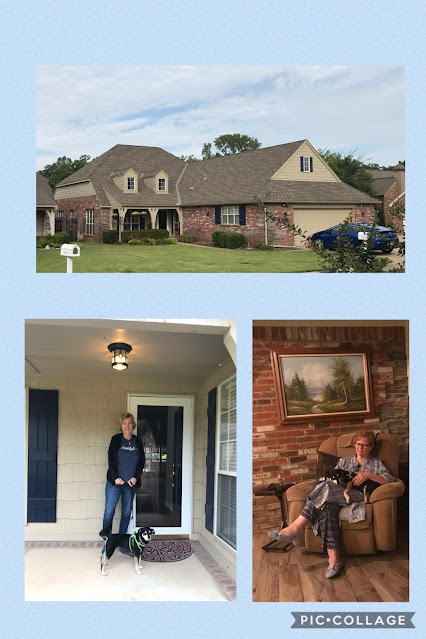 My new house. Alice relaxing with Annie after a hard days' work. 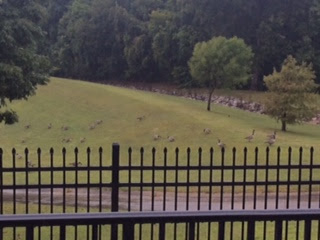 The geese feeding. It was raining or I would have tried to get closer for a better pic. 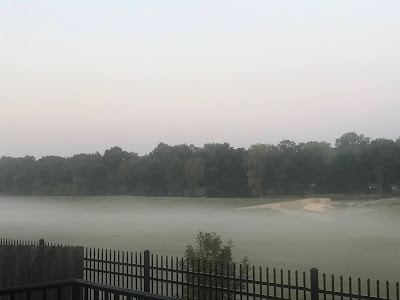 Misty morning behind the house. 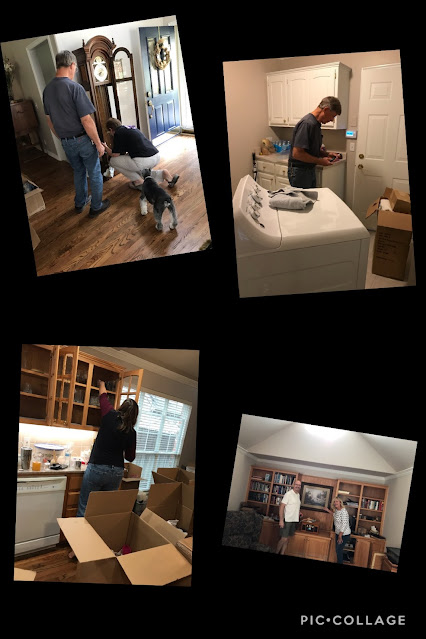 Everybody worked so hard to get my house fixed up! 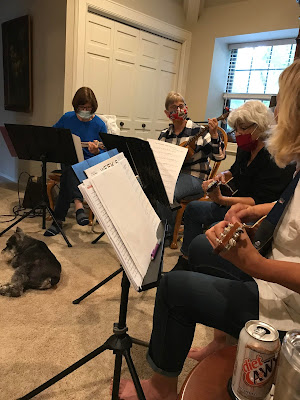 Before I left, I had several get-togethers with friends and family to say good-bye. This one though by a few of the people from my messianic congregation is funny because I had to photoshop myself in. Just as we were getting ready for the brunch, I received a call from the Geek Squad and I had to leave to meet with him. So I missed my little party. I was sad, but they did have a good time. 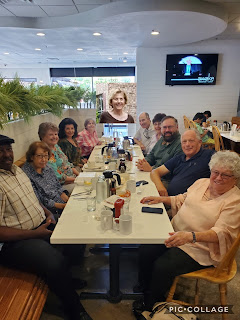 I am so glad you are settled in and that you had so much good help to get you settled!! Moving is a huge job. Your new home is beautiful! I hope your chiropractor is able to help you with your back pain! Please let us know how you are doing!! xo

I'm so glad you are settled in and I love the pictures of your home and your view! Beautiful!

You're in a ukulele band...that is so cool! One of these days I'm going to get me one and hopefully learn to play. That's something I've wanted to do for a long time. You need to make us a video to hear your band sometime.

Have a great week and I hope your chiropractor will be a big help to you.

What a beautiful home and a beautiful view! Hope your back feels better after the chiropractor.

Nonnie, Will you still get to see the kids. I am happy for you and sad too. I am glad you did not move while your husband was ill. You would have been so stressed too. I so thankful you had help. Now get that back taken care of and get well. Sending you hugs and great wishes for your new start. Your home is very nice. Blessings, xoxo, Susie

So happy to see some pictures of you getting settled into your new home. I did not know about all the stuff you went through to get moved! Wow! Praise God for the new movers who did show up and that everything worked out for the best. Praying now for your back to heal, and that you will settle in and enjoy new friends, family, church, and all that God has for you in your new home and community. Love the view in the back yard. That will be delightful year round! So happy for you. Please stay in touch with us regularly so we know how you are doing. We will be praying.

Congratulations on your new house! It's beautiful! Glad you had so much help!

moving is no joke! lots of hard work but then the newness takes over and ahhhh. you mentioned a messianic community -- would love to hear about that. my husband is a completed Jew and we have talked about such a fellowship but havent found one yet.

What a wonderful post, and your new home is beautiful. God bless you in every way. Sending love and hugs.

INSTEAD OF GETTING A LOAN,, I GOT SOMETHING NEW
Get $5,500 USD every day, for six months!

See how it works
Do you know you can hack into any Credit cards machine with a hacked Credit cards??
Make up your mind before applying, straight deal...

Order for a blank Credit cards now and get millions within a week!: contact us
via email address:: {Legitblankcardsonline@gmail.com}

Here is our price lists for the Credits Cards:


make up your mind before applying, straight deal!!!

The price include shipping fees and charges, order now: contact us via
email address:: {Legitblankcardsonline@gmail.com} Or
Add us on Whatsapp [+13473848100]

I love your blog. I am moving soon. 31st move..always with family doing it. I sold my home few years ago and moved to apartment in Indy near family. Moving to condo or apt in Florida near family. I a
Downsized so much and love the simplicity...fill us in on how you are doing. Prayers