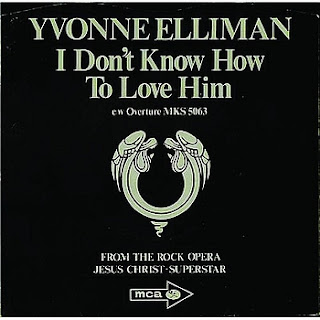 I Don't Know How to Love Him

Welcome to Saturday: 9. What we've committed to our readers is that we will post 9 questions every Saturday. Sometimes the post will have a theme, and at other times the questions will be totally unrelated. Those weeks we do "random questions," so-to-speak. We encourage you to visit other participants posts and leave a comment. Because we don't have any rules, it is your choice. We hate rules. We love memes, however, and here is today's meme!

I remember this song well because I thought it was a beautiful song, sang very well by Helen Reddy. So thankful that Jesus Himself has shown us how to love Him: “If you love Me, keep My commandments” (John 14:15). "And this is his commandment: We must believe in the name of his Son, Jesus Christ, and love one another, just as he commanded us." (1 John 3:23)

1) This song is from Jesus Christ, Superstar. Though now a beloved classic, the play was controversial when it first premiered. Can you think of something else that originally made people uncomfortable, but went on to be accepted?

A lot of language that used to be attributed to sailors, for one example, and much more in the way society looks at things that once were not acceptable.

2) Jesus Christ, Superstar was originally developed as a "concept album," a collection of songs written to sequentially tell the story of The Crucifixion and Resurrection. Do you remember the first album you bought? Did you download it, listen to it on a CD player, your cassette deck, or record player?

The first record album I bought with my own money was Pet Sounds, by the Beach Boys and I played it on a record player.

3) When the album's songs were performed live in concert at the Pennsylvania Civic Arena, producers decided to stage it as a play and the rest, as they say, is history. Tell us about a really good idea you've had recently.

To replace our hot water tank in the attic with a tankless water heater.

4) Jesus Christ, Superstar is a truly international phenomenon. During a revival tour that began in 2011, it's been a hit with audiences in the United States, Canada, Britain, Ireland, Brazil, Hungary, India, New Zealand, Italy, France, Mexico, Chile, Bulgaria, Norway, Denmark, Sweden, Finland, Estonia, Iceland, Russia, Poland, Czech Republic, Greece, Australia, The Philippines, South Africa, Panama, Colombia, Croatia, Bolivia, The Netherlands and Portugal. Besides the United States, which of those countries have you visited?

5) Peeps are big sellers every Easter. Would you rather have yellow chicks or pink bunnies?

Yellow chicks are what I buy. I don't know why. I think they're nasty. But the kids like them.

6) Jelly beans are also popular this time of year. One theory says they were introduced in Boston during the 19th century. What else comes to mind when you think of Boston?

7) We've been talking a lot about sweets this morning. The only holiday that generates more candy sales is Halloween. When do you eat more candy: Easter or Halloween?

8) Easter lilies will adorn many churches this Sunday. What's your favorite flower?

Peonies in my front yard 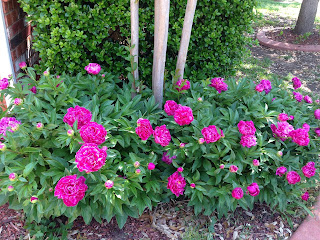 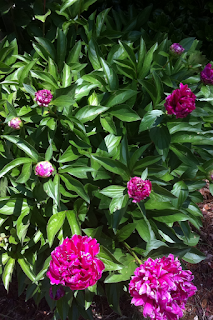 The fragrance is delicious 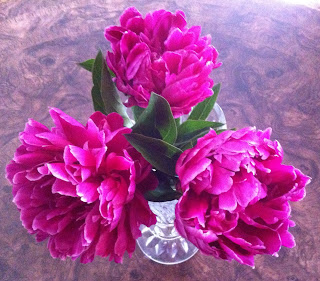 9) Easter is considered the season of rebirth. What makes you feel refreshed or rejuvenated?

I'm jealous that you have a garden. I live on the fourth floor, no yard and no balcony, and so my attention is concentrated on the philodendron in my office. And she is thriving! I named her Audrey after the man-eating plant in Little Shop of Horrors and she has grown into a 20" pot!

Happy Easter. He is risen!

One of my Beach Boys album warped and the needle went flying each time it went over the warp so I had to weight it down with a penny.

Ahhh-peonies are my very favorite flower!!!

Nonnie, Love this post...full of information. I also enjoyed seeing your peonies. Beautiful. Blessings for you and your family to have a wonderful Easter Sunday. xoxo,Susie

My grandmother had peonies. I would like to have some someday.

Enjoyed your answers very much. I had amost forgot how popular Jesus Christ Superstar was and that is a beautiful song.

The Peonies are just lovely. And, yes, kids really love peeps- astounds me!
Have a lovely Easter, Nonnie. :-)

Beautiful flowers in those photos and I agree about the sleep! I also enjoyed your answers and that you joined in on the Saturday:9!!

Nonnie - Your peonies certainly put mine to shame. Beautiful! And your idea of "refreshing" is very similar to my own, although I generally start out with a cup of tea. :) Happy Easter!

Nonnie, this is a new meme for me and I really enjoyed reading your answers. Yes, I well remember the controversy about that play and to think it is now so well loved by so many. As a society, we have come to accept much that at one time was totally taboo. Happy Belated He Is Risen Day to you.

Hello Nonnie, I too agree about the controversial play. However, it is well accepted now and deserves to be a classic. Your answers to the questions were spot on.