Linking up with Sam this morning for some fishy questions. You can find them right here to answer on your blog. 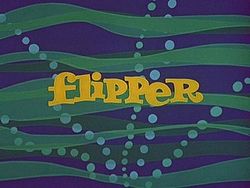 Unfamiliar with this week's tune? Hear it here.

2) Brothers Sandy and Bud consider a bottle-nosed dolphin, named Flipper, their pet. Do you currently share your home with any animals? My dog, Annie! She's great company. Just wish she could do something with her hair--she sheds! Here she is guarding her toys. 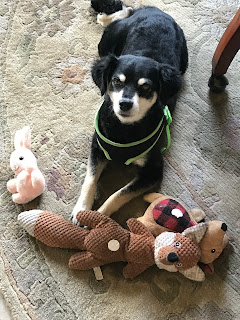 3) Bud and Sandy's dad was Chief Warden Porter Ricks of the fictional Coral Key Marine Preserve. In reality, the show was filmed in Miami and Key Biscayne. When were you last in the ocean? I think 2014. Which ocean was it? The Gulf of Mexico, Port Aransas, I think.


4) There was no one single "Flipper." In close-ups, the role was played by a dolphin named Susie. While Susie was good at interacting with people, she had trouble with stunts, and sometimes a male dolphin named Clown was brought in for action sequences. Do you consider yourself more social, like Susie? Or are you more athletic, like Clown? I used to be fairly athletic, I am somewhat social--not extremely outgoing.

5) Without looking it up, do you know the difference between a dolphin and a porpoise? No I'm hoping you will tell us.

6) Flipper wasn't just a TV pet. He was an industry! During the show's run, Flipper comic books, coloring books and puzzles were very popular. As an adult, do you entertain yourself by reading comics, coloring, or completing jigsaw puzzles? No.

7) The Flipper lunchbox was also a big seller. It came with a Thermos topped with a red cup. Do you own a Thermos? I just got rid of one. I had a plaid lunchbox with the thermos in it. I carried a plaid lunchbox all through elementary school and the thermos always had chocolate milk in it. You can't see it that well, but I am holding it in this pic. 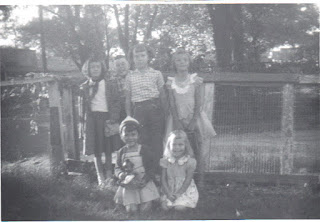 8) In 1964, when Flipper premiered, it was up against The Outer Limits and The Jackie Gleason Show. If those were your only viewing choices, would you watch the family show about the dolphin, the sci-fi anthology show, or the comedy-variety show? (Or would your rather flip through a magazine?) I would rather read a book. But if we must choose something to flip, I would choose one of my magazines.

9) Random question  -- Which would you be more comfortable explaining: how a car engine works, the current IRS tax brackets, or the rules of baseball? Oh mercy, I will have to keep silent.

Oh, Annie is so cute! And so proud of those toys. I suspect she enjoys defending them, too.

I enjoyed your answers. And the difference is the noses, one is longer than the other, smiles.

Have a beautiful day, friend.

Those older lunchboxes with the thermos can be rare and valuable. I wonder what you had?

Annie is so cute! Thanks for sharing her picture! Loved your answers! Have a nice weekend.

Good Morning. I did enjoy your answers. I had forgotten completely about the TV series Flipper. Guess I didn't watch it much.

Your Annie is precious. I so miss our Molly. It's been a year. It was nice that Shih Tzu's don't shed. More like human hair. She loved her toys and protected and slept with them. She's gone, but I still have her toys in a bag.

Have a great day!!

Your Annie is adorable! I was 11-12 when Flipper was on and loved it. Fun questions and answers today!

I think I watched that show but I actually remember watching The Outer Limits a lot so maybe the Flipper shows I saw were reruns!

Cute retro picture! I am a book reader too. Your dog looks a little like mine. She sheds too!

Your Annie is a sweetheart. Does her hair grow so that it needs to be groomed? Our "grandpuppies" are Pekingese and they also shed, but their hair grows and they have to be groomed quite often. That helps keep the hair from shedding so much. But even with the shedding, I am sure you wouldn't trade her for the world. She is so sweet. I also prefer reading to watching TV. As a kid we watched a lot of game shows and other series that were family friendly. I love your vintage picture with your lunchbox! How special that is! Hope you have a blessed and beautiful day today! It's Sunday!

A dolphin is a mammal living in the sea. A porpoise is a creature living in a shell and walks slowly. Or is that a tortoise?

Love your answers. Especially the last one. I also had a plaid lunchbox with a plaid thermos in it.
Have a wonderful, blessed Sunday- xo Diana

I loved Flipper! Maybe I just wanted to go to Florida! :-)