A Story for National Adoption Month

If it hadn't been for Facebook and blogs, I wouldn't have been aware that November is National Adoption Month. And today being Susan's birthday, I want to re-share a story about adoption of which I am especially partial.

Yes, there is an adoption story in our family. My sis-in-love, Susan, was born in Germany and adopted by an American serviceman and his German wife, Ruth, while he was stationed in Germany. After his service in the U.S. Army, he brought his little family to America to live, and Susan grew up, fell in love with, and married my wonderful brother, Phil. (He took one look at her at the Mexican restaurant where they were both working and told his buddies that she was the girl he would marry.)

Eight years of marriage passed before the very surprising, unexpected and joyous news came one day that they would have a child. Their son, Chase, was born in May of 1985, and only a few months after this great gift, other very surprising, unexpected and disheartening news came their way. My brother was diagnosed with a very rare form of lymphoma. This news followed on the heels of our Mother suffering from leukemia, and me still mourning the death of my husband. A group of menacing dark clouds seemed to hang over all of us for a very long while as both Mother and Phil went through chemotherapy and radiation treatments. For Phil and Susan, their son Chase was a light for them both as they went through that darkness.

Having previously shared the story of my brother's bone marrow transplant and my mother's death which occurred within the same month in 1987 right here about Second Chances, I am doing a quick fast forward into the year 1995 (or thereabouts).

My brother recovered from his lymphoma and he and Susan doted on their son like crazy as he grew up. Now it just happened (as it does when it's in God's hand) that while at football practice one day, Susan noticed one of Chase's little friends in need of someone to take him to and from practice. As Susan continued to provide those rides for him, she got to know him, and it was quickly apparent that Billy came from a troubled and impoverished background. As Chase and Billy became close buddies, Phil and Susan took him under their wings to love him unconditionally, and share their home and hearts with him. They encouraged him in his education, his sports activities, and above all, his faith in Jesus. The time came eventually when Billy moved in with them and became their son by heart - not legalities. (If you are familiar with the movie The Blind Side, you will recognize the close similarities!)

Chase and Billy shared the love of sports and played football during their high school years for Union High School in Tulsa. They were players on the team that beat whipped the toughest team in town their senior year and went on to state, winning the championship. (I froze my backside off the night we watched them play and win. What an exciting time it was for them.)


Upon graduation from high school, they went separate ways to college. Chase's dream since first grade had always been to be in the Army and his parents begged him, insisted, that college must come first. After his acceptance into West Point and playing football for the Army, seeing him graduate from that honorable school was probably one of the proudest moments of Phil and Susan's life! We were fortunate and blessed to have watched him play for Army and attend his graduation at West Point. He has since graduated as an Army Ranger and gone on to Special Forces, serving twice in the Middle East. 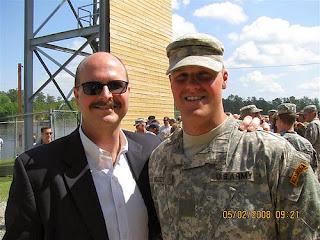 My brother encouraged and guided Billy with his practical wisdom, and Susan helped him do everything necessary to enter the state university. After his enrollment, Billy did a "walk-on" gaining a place on the football team. Even greater than that though, Billy not only excelled in school and football, but he was a member of the Fellowship of Christian Athletes and traveled around to high schools, giving his testimony about his faith! How awesome is that? 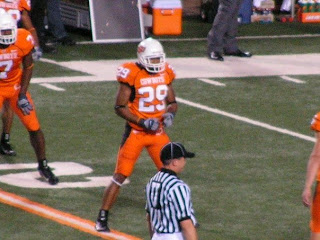 What greater joy could have been brought to my brother and his wife than to know they had guided this young man in the path that the Lord had made for him before he was ever born!!

After graduating from college, Billy followed in the steps of his brother, Chase, and joined the U.S. Army. We had the privilege of seeing him graduate as Lieutenant in Fort Benning, Georgia. 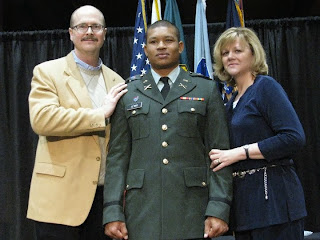 We have come to know and love Billy. He has a heart for kids, his faith is strong, he always has a smile, and lots of silly words for us. 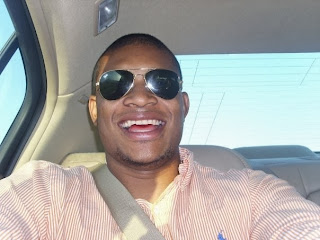 So, when he met this lovely young lady in college through the Fellowship of Christian Athletes, 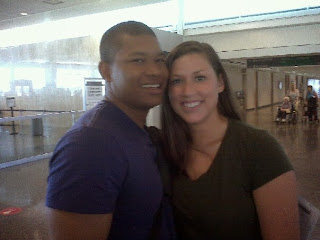 all of us were happy and rejoiced with them as we saw their love expressed in the exchange of their vows at their beautiful wedding! 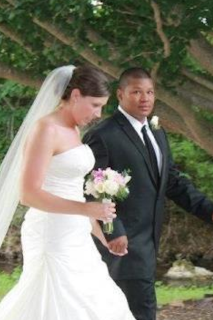 And then later with the birth of their two sweet children.

My little blog story merely presents the highlights of some of the amazing things that happened in my dear sis-in-law's life after her birth mom had gone through the painful experience of giving her up and placing her for adoption. Only God knows the details of all that and what Susan's life may have been had she remained in Germany. And since He never makes mistakes, what I believe with all my heart is that God placed her where He did for a purpose not only to lavish His love on her, but to enrich the lives of others. She had a heart of love, not only to share with my brother and their son, but arms wide enough to reach out to love Billy and make him part of her family, too. 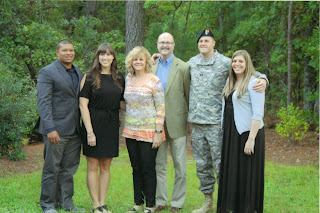 What an amazing and wonderful story! I loved reading it. Thanks for sharing it, with pictures!! Happy Thanksgiving to you and your family.

OH, tears are flowing! What a beautiful, beautiful story, and what a redemptive God we serve! This should be a book and a movie, truly. My daughter is in FCA, and I'm thrilled to know the connection there. I'm so glad you posted this!!!

What a heartwarming story. What a special way to share a Thanksgiving story. Blessing to you and your family on this day of gratitude.

Great post! There's an adoption story in my family as well. Two, actually! I was nearly adopted at the age of 9. My sister, Luann, was given up for adoption at 2 years of age. Your story is heart warming!

You and your family have much to be thankful for! Thank you for sharing your story and your brother's story with us. I hope you had a great day today...Happy Thanksgiving!

So many blessings! :-) Hope you are doing well, it's been awhile since I have been able to catch up. Have a wonderful week!
Blessings,
jill

What a sweet story. It gives me a whole lotta hope!

What a beautiful testimony to love and family!